Having disliked secondary school, Grace Hodge (Education (Psychology and Learning) 2021) did not expect to advance to A-Levels, let alone pursue a degree. Now she is thriving as a student of Gonville & Caius College, sharing the reality of life at the University of Cambridge for existing students and aspiring ones.

Grace is from Saltash, Cornwall, across the Tamar Bridge from Plymouth, Devon. She had a negative experience of secondary school but had the intrinsic motivation to learn. Having considered joining the Royal Air Force and an apprenticeship as a travel agent, she opted to continue to A-Levels and then applied to Cambridge.

“I'd go home and re-teach myself all the content. I did well in GCSEs, but it had absolutely nothing to do with school at all. I taught myself everything. At home I would just focus on the stuff I found interesting.”

Grace attributes her experience in part to the school itself – a lack of resources and challenges recruiting and retaining good teachers – and to a diagnosis of autism.

“For autistic people schools are just very challenging,” she adds.

“It's very overwhelming, very overstimulating and building social relationships is really hard. And so I found that very difficult.”

She believes it would have helped to know she was autistic sooner.

“Once I found out everything just fits into place,” she says.

“I would have got additional support at school. I would have been able to take breaks more often and it would’ve explained a lot of stuff, rather than me thinking that there was something wrong with me.”

Grace says females are often diagnosed with autism later due to masking. She says she was adept at mimicking others at school but would be “emotionally exhausted” once she returned home.

“It’s only when you leave that environment and you can actually be yourself you realise how much effort you had been putting in just to act normal,” she adds.

She is thriving in the university environment, where she has more autonomy and supervisions.

“Obviously I have a lot of work to do, but I don't have to do that work in a specific place that I'm told to do it. I can do it wherever I feel is best for me at the time,” she says.

Grace is learning about neurodivergence in her degree and is keen to become an Educational Psychologist in the longer term. She had a summer internship as a Research Assistant to Dr Debbie Aitken, a former supervisor now at the University of Oxford. They have a paper on supporting autistic medical students in preparation for publication.

Grace is also keen to challenge misconceptions of Cambridge through access work. She dismisses the outdated external stereotype of a Cambridge student as privately-educated and upper class, and the internal one amongst students that you need to be working all the time.

“The Twitter account is really important to show that there's more to being here than just studying,” she says.

“A lot of the stuff I share is about the work I'm doing. And I'm still trying really hard and I really want to get good grades.

“But equally like I'm not going to do that at the detriment of my mental health and I'm still going to be balanced.” 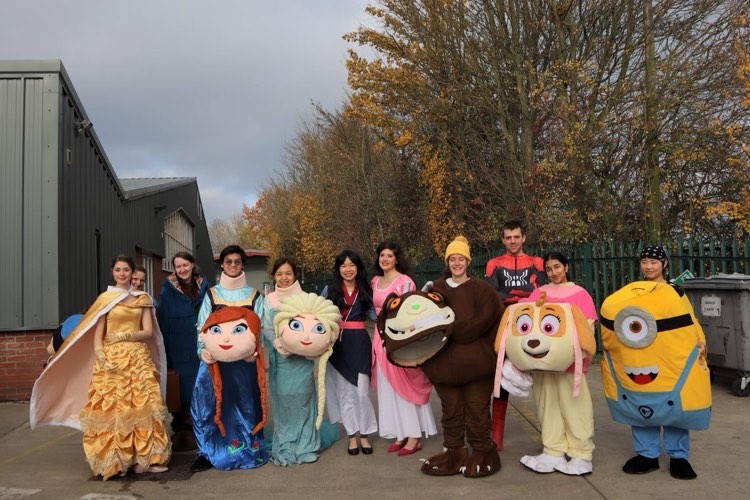 Grace, fourth from right, as the Gruffalo

Grace works with homelessness charity Embrace and Make a Smile, where she dresses up as characters to visit children in hospital. She also volunteers with a local church, Holy Trinity Cambridge.

She is thrilled with the new gym equipment in Harvey Court gym, where she can be found most mornings as part of her powerlifting training.

She adds: “It's quite an easy way to measure progress. With lifting like you often have to video yourself to check your technique and obviously the weights go up numerically.”

She is reminded about her progress and sense of place when showing primary school pupils around Caius.

“At Cambridge you often overlook how amazing it is once you’ve lived here for a while. And so then you get all these children it and they're like, ‘Wow’,” she adds.

“It’s a reminder of how excited I am to be here. It's really important for them to have a chance to be in these places and to know that it’s achievable if they want to do it.” 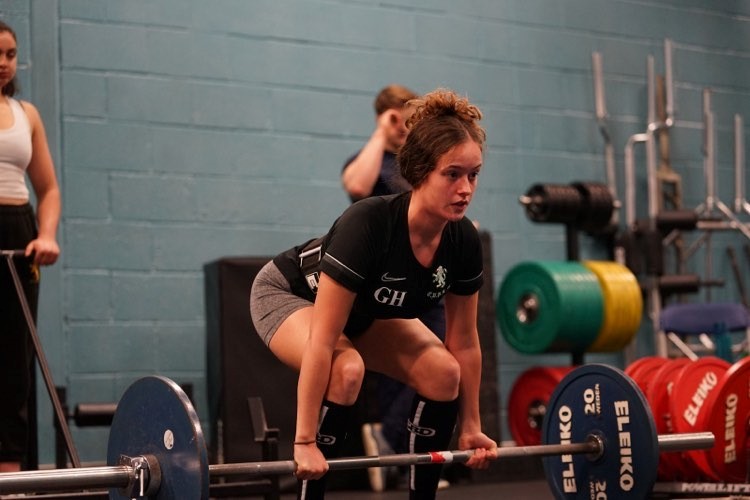 Grace with the University powerlifting club