And the multitudes that went before, and that followed, cried, saying, Hosanna to the Son of David: Blessed is he that cometh in the Name of the Lord; Hosanna in the highest.  (Matthew 21:9)

'Blessed is he that cometh in the name of the Lord!'

And yet how should we discern when he who comes in the name of the Lord comes truly so? If the multitudes that went before, and that followed after, cry Hosanna to him; if the saints of former ages and their successors approve the manner of his coming; if he come meek and lowly, humbly riding upon an ass, with palms and olives, the ensigns of peace and love; then he comes ‘in the name of the Lord’: but if proud and scornful, with horse and chariot, sword and spear, instead of olive boughs and branches, with a sword to cut in sunder the bond of peace and unity, and a spear to keep off charity, let him cry out ‘in the name of the Lord’ no more; [it is] a mere pretence … nothing in it really of God. Hosanna to [none] such.

But Hosanna to him who truly comes in the name of the Lord. It is the business of this time. The days of holy Advent, are to teach us to sing Hosannas to our Saviour, to bless God for his coming: to bless him in the highest, with heart, and tongue, and hand, that he may also bless us for it in the highest.

That it might be done better, Holy Church has designed four Sundays to prepare us for it, wherein to tune our pipes, and fit our instruments and voices to sing Hosanna in the right key, the highest pitch, to praise God as is fitting for Christ's coming.

Let us consider who they were that here blessed Christ for his coming: 'The multitudes that went before, and that followed.'

Many they were, it seems, and not a single multitude neither, multitudes in the plural: and though it be no argument to prove anything good or lawful because the multitudes do it, yet when the multitudes do good, it is good to take notice of it … The song of praise sounds never better than in the great congregation, and among much people; the music never sweeter in the ears of heaven than when the choir is fullest; a good note to teach us to fill holy assemblies, to bear our parts in the congregation.

And in this congregation, the music, it seems, has all its keys and voices; men, women and children all sing their parts; no sex or age to think themselves exempted from bearing part in God's service: though the Apostle will not suffer women to preach and teach, he will give them leave to sing and pray, to answer the responses, antiphons, and versicles, the Hymns and Psalms; the little children, too, to learn betimes to lisp them out; no better seasoning of their mouths than with prayers and praises to their Redeemer.

Thus we have the key and tune of blessing God and Christ devoutly, confidently, publicly, unanimously, orderly, cheerfully, and universally, with all our faculties and powers. [So] let us now hear the song of praise, 'Hosanna to the Son of David: Blessed is he …'. And that we may sing in tune, let us know our parts.

Three parts there are in it as in other songs, the bassus, tenor, and altus ­ the bass, the tenor and the treble. 'Hosanna to the Son of David;' there is the bass, the deepest and lowest note, the humanity of Christ in filio David, being 'the Son of David': the bass sings that, that is low indeed for him, we can go no lower. 'Blessed is he that cometh in the name of the Lord;' there is the tenor or middle part, he and the name of the Lord joined together, God and man united –that is a note higher than the first, the Mediator between God and man; God in the highest, Son of David in the lowest; the middle note follows. And Hosanna in altissimis, the altus or treble, the highest note of all: we can reach no higher, strain we never so high.

We begin low, that is the way to reach high; 'Hosanna to the Son of David:' yet as low as it is, it is hard to hit, hard to reach the meaning of it. ‘Hosanna’, a hard note, so interpreters have found it.

St. Augustine will have it an interpretation only, to express rejoicing. The truth is, it is an expression used by the Jews at the Feast of Tabernacles, a joyful acclamation, enough to authorize common expressions of joy, especially joy inexpressible (such as ours should be for the Son of David's coming) [which] may be allowed to express itself as it can, when it can do no better.

Some interpret [Hosanna as] redemption; others, an hymn or praise; others, grace; others, glory; others, boughs 'to the Son of David:' all yet concur in this, that it is a joyful wish for prosperity to Christ, under the title of 'the Son of David:' grace, redemption, praise and glory, psalms and hymns, and all the other outward expression of thanks, respect, and joy be given to Him who now comes to 'restore the kingdom of his Father David.'

It is an easy observation, hence, that our rejoicings are to consist in prayers and praises, in hymns and collects; no true Hosannas to Christ, no true blessing Him but so; no keeping Christmas or any feast without them. To spend a day in idleness, or good cheer, is not to keep holiday: to keep Christmas is not to fill our mouths with meat, but our lips with prayers and praises; not to sit down and play, but to kneel and pray; not to rest from work and labour, but, by some holy rest and retirement from temporal labour, to labour so to enter into eternal rest. The business of a 'holiday' is holy business; 'Hosanna' [the] business of Christmas, Christ's coming so to be solemnized with solemn prayers and praises, and thanksgivings.

All perhaps, cannot spread carpets, cloths, and garments to entertain Him, or have all boughs of palms or olives to meet Him with; all have not wherewith to make a solemn show and flourish; but all have tongues, all may sing Hosannas to Him … And if we set about it in excelsis, with high courage, such as becomes the servants of the Highest, and neither fear the face of man nor devil; we may do it in excelsis too … If we follow Him strongly with our cries, follow these multitudes close in their devotion to follow Christ, sing out His praise with courage, pray with fervency, go out to meet Him with joy, entertain Him with gladness, own His coming with confidence, celebrate it with holy worship, do all to the highest of our powers: our Hosannas will be quickly turned into Alleluias … and we, with all the saints who went before or followed Him, [will] sing Benedictuses and Alleluias in the highest; to the highest God in the highest heavens, for ever and ever. Amen. 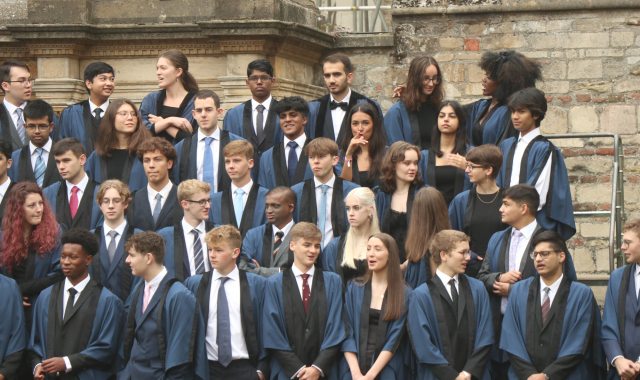